Headquartered in Hagåtña on the island of Guam, Pay-Less Supermarkets began as just a single grocery store in 1950. That one grocery store has grown into a locally-owned supermarket chain with 8 locations across the island: Maite Pay-Less, Dededo Pay-Less, Mangilao Pay-Less, Micronesia Mall Pay-Less, Oka Pay-Less, Sinajaña Pay-Less, Sumay Pay-Less, and Yigo Pay-Less. At each of these locations, Pay-Less promises to provide the best value of fresh quality products packaged into an exciting food shopping destination, build a family of valued and impassioned employees, and care for their community.

The Perfect Storm of Challenges

Towards the end of 2020, leadership at Pay-Less realized that a perfect storm of challenges had arisen for the company. One such challenge was pricing. Rising costs due to inflation coupled with the shattering of the tourism industry and job market due to the COVID-19 pandemic led to an increase in both overhead costs such as power and water as well as a rise in product cost.

Another challenge facing Pay-Less was increased competition in the supermarket industry. During the height of the COVID-19 pandemic, grocery stores were considered essential businesses. The increased opportunity to meet demand led to the opening of at least three new competitor stores across the island. In addition to these challenges, Pay-Less was also beginning a renovation on one of their main stores. Leadership wanted to ensure that in the midst of these potential roadblocks, they could continue to hold true to their mission statement and provide their shoppers with the best possible grocery experience. Pay-Less already had some strategies in place, but wanted to increase their coupon reach and provide more incentives for their shoppers to remain loyal to Pay-Less above other stores in the area.

According to Pay-Less marketing manager Carina Pegarido, shoppers in Guam just don’t use coupons like they do in the mainland United States. Referencing shows like “Extreme Couponing,” Pegarido says that she, like most of their shoppers, just did not grow up with frequent coupon usage—especially when the coupons were printed out. Pay-Less recognized that they needed a way to incentivize their shoppers to use coupons when it wasn’t yet a part of their typical shopping routine. In September 2021, Pay-Less decided AppCard was the missing piece of the puzzle. 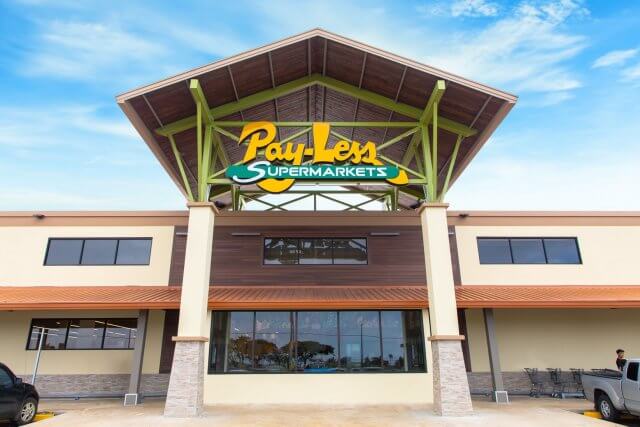 After implementing the AppCard platform in September 2021 and adding to its shopper experience among other digital coupons, Pay-Less saw an 80% increase in coupon usage. But what initiated this massive spike? Pegarido says that UNFI coupons played a huge role. When Pay-Less went back to UNFI as their primary wholesaler of product, they placed heavy orders of UNFI house brand products. UNFI’s partnership with AppCard meant that they were already putting in a great deal of effort into their coupons. Because Pay-Less was placing large orders of UNFI house brand products and UNFI was focusing their efforts on providing coupon offers for these products, everyone won.

Carly Mandler, Digital Manager of Retail Marketing at UNFI, says, “UNFI is thrilled to have Pay-Less participating in our partnership with AppCard. It’s exciting to see independent grocers like Pay-Less, creating customized and unique programs to serve the needs of their shoppers and communities in order to provide valuable savings and rewards. We champion success for our UNFI independent grocers and we’re delighted with the success Pay-Less is experiencing with AppCard. The results are fantastic—some of the top digital coupon redemption results for a UNFI independent grocer program.”

Pay-Less’ rewards program is called Måolek Rewards—måolek means “good” in the native language of Guam, and the outcome of these rewards for their shoppers, employees, and community have been nothing but good. Recently, Pay-Less ran a promotion called Måolek Deals of Summer. Every day in the month of June featured a different digital coupon, something new and exclusive for each day. One of these coupons was a promotion through UNFI: on June 24 and 25, the daily coupon was 20% off Essential Everyday products, one of UNFI’s house brands. When shoppers clipped this digital coupon and redeemed it at check out, they were automatically entered to win a charcoal grill and an Essential Everyday grilling essentials pack. This promotion resulted in over 5,500 redemptions—shoppers saved almost $4,000 in just those two days.

AppCard’s collaboration with Pay-Less and UNFI is crucial to the success of their digital coupons. The ease of the in-lane terminal and accessibility of the digital coupons in comparison to printed coupons make shoppers more inclined to clip and redeem, leading to savings for the shopper and increased loyalty to Pay-Less over other competitors. Pegarido says, “Convenience is a big word. The ease of using digital coupons has made it where accessibility and usage has increased significantly. What I love about AppCard is that they said, ‘We’ll create a digital coupon library of manufacturer’s coupons that will be specific to what the movement and inventory is at store.’ So when the customer goes in to see what the digital coupons are, they are specifically curated to where their shopping is and where they have it in store. So that makes the ease of it so much better.”

Even beyond the numbers, these promotions cultivate a sense of community and fun among Pay-Less shoppers. Pay-Less has even more promotions coming up that will continue to cultivate this atmosphere in their stores, including an upcoming coupon for Stone Ridge ice cream, a UNFI brand. Since Pay-Less knew from UNFI that this coupon was coming, they decided to capitalize on the opportunity by putting Stone Ridge ice cream on ad, running a sale on Essential Everyday ice cream cones, and entering shoppers into a drawing to win a Stone Ridge ice cream pack with ice cream, scoops, cherries, and other summer dessert necessities. By running these cross-promotional campaigns, Pay-Less aligns things together to showcase a greater amount of value—and packages it up in a fun, exciting way.

Leadership at Pay-Less has realized that collaboration is key for digital coupon success. Pegarido says, “It’s one thing to have a digital coupon and put it out there. It’s another thing to know what that’s going to be and how we can support and capitalize on that—and create something fun! We want our customers to come in, to enjoy the experience, to get those savings on multiple tiered levels, and that’s what we’ve found successful. … If we can partner together and plan something, it’s so much more fun.”

To learn more about how AppCard works and what our loyalty program can do for you, contact us to set up a demo today!

AppCard is a Member of the Intel IoT Solutions Alliance. A global ecosystem of more than 800 industry leaders, the Alliance offers its Members unique access to Intel technology, expertise, and go-to-market support, accelerating the deployment of best-in-class solutions. Powered by Intel CPU, AppCard J-brain ensures data is captured at the EDGE and transferred to the cloud where we run our machine learning and AI to guarantee that offers, rewards and campaigns are all personalized to shoppers and employees.

Contact us for a personalized demo to learn more about how AppCard works and discover how data-driven marketing can increase customer retention.

We use cookies on our website to give you the most relevant experience by remembering your preferences and repeat visits. By clicking “Accept All”, you consent to the use of ALL the cookies. However, you may visit "Cookie Settings" to provide a controlled consent.
Cookie SettingsAccept All
Manage consent

This website uses cookies to improve your experience while you navigate through the website. Out of these, the cookies that are categorized as necessary are stored on your browser as they are essential for the working of basic functionalities of the website. We also use third-party cookies that help us analyze and understand how you use this website. These cookies will be stored in your browser only with your consent. You also have the option to opt-out of these cookies. But opting out of some of these cookies may affect your browsing experience.
Necessary Always Enabled
Necessary cookies are absolutely essential for the website to function properly. These cookies ensure basic functionalities and security features of the website, anonymously.
Functional
Functional cookies help to perform certain functionalities like sharing the content of the website on social media platforms, collect feedbacks, and other third-party features.
Performance
Performance cookies are used to understand and analyze the key performance indexes of the website which helps in delivering a better user experience for the visitors.
Analytics
Analytical cookies are used to understand how visitors interact with the website. These cookies help provide information on metrics the number of visitors, bounce rate, traffic source, etc.
Advertisement
Advertisement cookies are used to provide visitors with relevant ads and marketing campaigns. These cookies track visitors across websites and collect information to provide customized ads.
Others
Other uncategorized cookies are those that are being analyzed and have not been classified into a category as yet.
SAVE & ACCEPT