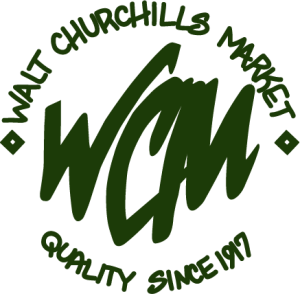 Walt Churchill’s Market has been supporting local growers and producers of Northwest Ohio since 1917. They’ve made it their mission to feature all the amazing products that the region has to offer, and continue to support buying and choosing local whenever they can. At both of their locations, Walt Churchill’s Market strives to provide shoppers with exceptional customer service, unparalleled variety, and to honor Midwest growers and producers.

Walt Churchill’s Market has been a part of the Toledo, Ohio suburbs since 1917. They pride themselves on their ability to offer top notch service, the freshest, locally-sourced produce and treat their shoppers like family. As such, their prices were often higher than those of the big box retailers. Store owners knew that they didn’t want to compromise the shopping experience in order to compete on price, so they sought out alternative marketing tactics and ways to make sure their shoppers understood the overall value they offered. They also had more and more customers actually asking, “When are you going to have a loyalty program?”

“We started noticing a number of higher-end retailers focusing their marketing efforts around their loyalty programs, and they were seeing a lot of success with these programs. We realized that it could be a good way for us to keep our shoppers engaged,” says Kunal Dawar, VP Operations at Walt Churchill’s Market.

After a few years of discussion within the company, Dawar and the leadership team came across AppCard at the NGA Show in 2019. The ease of use for shoppers and cashiers, as well as the robust reporting were aspects of AppCard that they believed would make the program a success. After speaking with other grocers on the AppCard platform, and getting good feedback on their experiences, they decided to get started.

“There were some technical details we had to figure out during the setup, but we were very happy with the very quick and helpful support we got from both our Account Manager and the technical team at AppCard,” says Amy Stafford, Pricing Coordinator at Walt Churchill’s Market.

Once the program was configured, the stores began enrolling their cashiers before offering the program to shoppers. They created banners to advertise the rewards program before launch, to get shoppers excited.

It wasn’t long after the program launched that they were seeing nearly 50% of shoppers enrolling to earn points and rewards. Cashiers remarked at how eager shoppers were to participate, especially since it simply required their phone number to join. The seamless sign up process, and the fact that shoppers didn’t have to carry a card were very appealing aspects of the program.

To keep the enrollment percentage high, leadership at Walt Churchill’s Market knew they needed to keep their cashiers engaged. They created and continue to conduct contests to incentivize cashiers to encourage new sign ups and remind existing members to log in during check out. As a result, nearly 60% of their transactions are attributed to rewards members.

One of the most eye opening reports for Dawar and others at Walt Churchill’s Market was the Top Customer Report. AppCard allows grocers to identify the top shoppers by both frequency as well as cost. While Walt Churchill’s Market employees often recognize and know their frequent shoppers by name, they didn’t have visibility into the amount that these shoppers were spending. With AppCard, they were able to identify the top shoppers by spend, and plan on delivering special gift baskets of their private label items as a thank you for their business.

According to Dawar, the most impactful promotion they’ve run through AppCard has been Double Points.

For example, they ran a Double Points promotion on turkeys ahead of the Thanksgiving holiday. They used AppCard to deliver an email campaign to promote the Double Points offer, and almost immediately sold out of turkeys.

Another way Walt Churchill’s Market is using Double Points to increase traffic, sales and reward their shoppers is to reach out to local vendors and offer Double Points on seasonal or new items they are excited about. They have started to see this as a true “win, win, win”, for the customer, for their local vendors and as another easy way to build the basket.

“There is always a reward that appeals to everyone. For example, once shoppers reach 1,000 points they can redeem a $10 reward. The more opportunities we give shoppers to accumulate points, the faster they can achieve that reward and they are always excited to redeem those rewards. Double Points help our shoppers to reach a point level where they’re able to redeem a reward even quicker,” says Stafford.

“Overall, it has been a very positive experience working with the team at AppCard. The biggest plus has been the ability to work so closely with, and receive consultation from our AppCard Account Manager. From the top down, everyone at the company is excited to see where the program takes us,” says Dawar.

AppCard is a Member of the Intel IoT Solutions Alliance. A global ecosystem of more than 800 industry leaders, the Alliance offers its Members unique access to Intel technology, expertise, and go-to-market support, accelerating the deployment of best-in-class solutions. Powered by Intel CPU, AppCard J-brain ensures data is captured at the EDGE and transferred to the cloud where we run our machine learning and AI to guarantee that offers, rewards and campaigns are all personalized to shoppers and employees.

We use cookies on our website to give you the most relevant experience by remembering your preferences and repeat visits. By clicking “Accept All”, you consent to the use of ALL the cookies. However, you may visit "Cookie Settings" to provide a controlled consent.
Cookie SettingsAccept All
Manage consent

This website uses cookies to improve your experience while you navigate through the website. Out of these, the cookies that are categorized as necessary are stored on your browser as they are essential for the working of basic functionalities of the website. We also use third-party cookies that help us analyze and understand how you use this website. These cookies will be stored in your browser only with your consent. You also have the option to opt-out of these cookies. But opting out of some of these cookies may affect your browsing experience.
Necessary Always Enabled
Necessary cookies are absolutely essential for the website to function properly. These cookies ensure basic functionalities and security features of the website, anonymously.
Functional
Functional cookies help to perform certain functionalities like sharing the content of the website on social media platforms, collect feedbacks, and other third-party features.
Performance
Performance cookies are used to understand and analyze the key performance indexes of the website which helps in delivering a better user experience for the visitors.
Analytics
Analytical cookies are used to understand how visitors interact with the website. These cookies help provide information on metrics the number of visitors, bounce rate, traffic source, etc.
Advertisement
Advertisement cookies are used to provide visitors with relevant ads and marketing campaigns. These cookies track visitors across websites and collect information to provide customized ads.
Others
Other uncategorized cookies are those that are being analyzed and have not been classified into a category as yet.
SAVE & ACCEPT